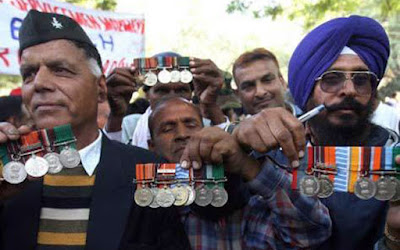 As media adviser of UFESM, I wish to rebut your views and put the record straight of what is the essence of OROP and not as postulated by you. In this connection your attention is invited to the one point of contention between the government and ESM organisations. This relates to a wrongly quoted and much misunderstood terminology of a 3% increase in pension for all pensioners year on year in perpetuity.
In essence, it is not a 3% increase but is a periodic review of pension to bring them at par with past pensioners. This has been narrowed down to the figure of 3% keeping in view the 30% increase in salaries of serving government servants between two pay commissions. When related to pensions it is reduced to 1.5% being 50% of any pay slab. This is further amplified that such an increase would be applicable to a pensioner till he/she reaches the top scale of their authorized pension. There after it ceases to be granted till such time as a new pay commission kicks in and salaries are increased. 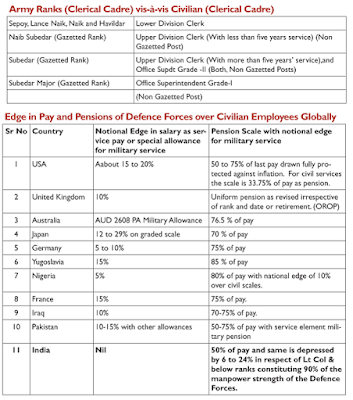 The current out flow of OROP due to the inordinate delay in its implementation over the last 9 years has resulted in an increase of estimated cost of approximately 6000 crores leading to a figure of 8,293 crores as a “onetime payment.” There after as worked out by the three service pay cells independently followed by a review and checking by CGDA and finally the MoD. The figure of out flow in the following year would be .85% of the defence pension budget and subsequently reducing @. .62, .32, .21 and 0. Therefore by the 6th year there would be no review required. Mathematically calculated the highest pro-rata percentage amounts to approximately Rs.1635 crores and reducing and therefore quite a low figure to what is being mentioned in the range of 20,000 crores by un informed or deliberately obfuscating individuals who do not have the best interest of the armed forces in their mind.

Another figure being bandied around is the defence pension bill of Rs. 54,500 crores. Unknown to most including servicemen and veterans, who should be made aware, Rs 32,000 crores out of this services 4 lakh defence civilians. The balance Rs 22,000 crores is all that is available for 26 lakh ESM and 6 lakh widows. To add insult to injury most of the defence civilians are in receipt of Non-Functional Financial Upgradation (NFU), essentially meaning that they have availed OROP since 2006. Incidentally for the uninitiated the out flow of NFU in the past 8 years is whopping Rs 17,000 crores for a motley crowd of at best 20,000 personnel.
We on our part have clearly spelt out the entire basis of our calculations but it seems that other than MoD, the finance ministry and the PMO do not seem to be able to bring out in the public domain any contentious issues that need to be ironed out. It is our perception that whatever is being done in the current scenario by various stake holders in the MoF & PMO is with a view to embarrass the Prime Minister, by not allowing him to honour his commitments made on board the INS Vikramaditya and re-confirmed in the sacred battle fields of Siachen. For us soldiers honouring a commitment irrespective of the costs involved financial or otherwise is much more important than the financial benefits of OROP.
Mr. Prime Minister, would you like to take a call?
Col Anil Kaul, VrC (retd)
Media advisor
UFESM
at August 31, 2015