Geeta Iyengar: The passing of a Yoga Giant 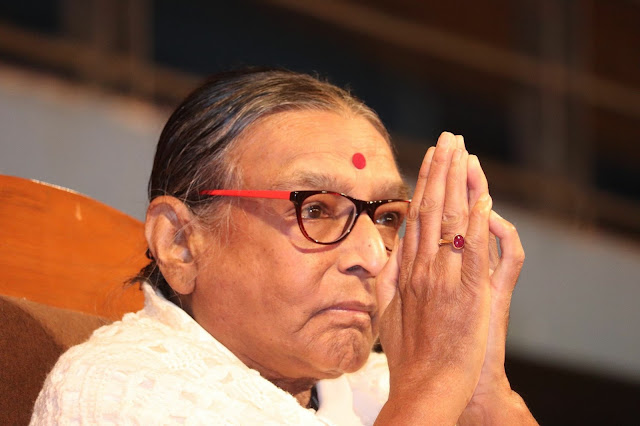 Geetaji passed away this morning in Pune at home. She was looking radiant and bright the last few days. She had concluded a mammoth 12 day programme, the BKS Iyengar Centennial Celebrations at Balewadi Sports complex. She liked to complete things and was up and about, meeting people till 7.30 the previous evening.

My first memories of Geeta Iyengar are of her glinting eyes. Magnificent orbs that noticed everything and missed nothing! Her voice had a baritone quality that made her students rise up above the routine of practice to higher highs and deeper depths in both Yog asanas and spiritual endeavours. Her presence would invoke a flurry of activity and a hush would descend on the hall. A hush of premonition. A hush of anticipation. And for the tardy, a hush of fear.

She could run a fiery mega class of a few thousand or tenderly adjust a student in therapy. Periamma was not just aunt but mother to not just her family but to thousands of students from the Iyengar Yoga community; old, middle aged, young and infirm!

A worthy hand and an able successor to her father, Yogacharya BKS Iyengar, Geeta Iyengar leaves behind a huge legacy and a void that will be hard to fill for her students. In Abhijata Iyengar, the Iyengar Yoga community sees a worthy successor albeit with a heavy burden to carry forward their legacy to the future.

Geeta Iyengar completed her teaching, her swan song, and tribute to Guruji BKS Iyengar
at the recently concluded BKS Iyengar Centennial programme where over 1200 students from 56 countries received insight, knowledge and even sometimes, a rebuke wrapped in the aphorisms of Patanjali.

Many will miss her and everyone will be sad but her crowning legacy lay in carrying Iyengar Yoga forward along with her distinguished brother and senior Iyengar Yoga teacher Prashantji. Her voice will remain the conscience of Yoga Sadhakas, who will find the blessing of spiritual honesty in her memory.

Celebrating the Approach of Winter

And so it begins, that feeling
Slowly it creeps up into your subconscious
A feeling in the bones
An aura in the early morning light

The march of the seasons still continues
Slower then faster, and then slow again
Autumn; when the leaves fall
That’s when reflection dances with memories

The wisdom of a lifetime
So many hats
Houses that you lived, and loved in
Time passes both in success, mediocrity and in failure

Why is winter special then?
Do you brood in the summer?
Celebrating the ability to feel
The luxury of thought

In a world gone insane.
Somewhere between the knife edge of money
And the blunt hammer of ego
There is a hidden refuge called decency

Is it an element or a compound?
What atoms constitute decency?
A thoughtful childhood
Or a value system beaten frame.

I see you
Our eyes exchange a fleeting hint
In my mind, I am grateful
And someday, I will repay it when you least expect it.
at September 13, 2018 No comments:

Email ThisBlogThis!Share to TwitterShare to FacebookShare to Pinterest
Labels: Decency

Walk away, walk away!


In the amber, angry at the world
Hazy eyes, resentment at the callous
Grouses and steeping anger
Yelling, screaming and then lapsing into a stupor

Your heart is broken, and your self esteem shattered
Struggling to ignore disrespect
Working harder to dull the humiliation

It is the loved ones, that hurt you the most because you let them
Relatives and colleagues, lovers and spouse
When does self respect stop chasing pity?
When does clarity beat tunnel vision of the scorned.

Thinking about peace, and moksha
Burning pride, forsaking the ego
The external is finite, what is infinite is within
Walk away, walk away!
at September 04, 2018 No comments:

Enigma in the Backstreet

Dark are the orbs of those eyes
Little hints, then nothing
‘Try not to think about it’, is how the conversation ends
Then turn your back on me.

Sizing each other up
Unstable interactions, smiles and then blank
Hiding knowledge in poker faces
But the past always finds a way to the surface

Do I know you?
What do we seek?
In being mindful, the missing memories
Incomprehension of what seemed once well known.
at June 23, 2018 No comments: 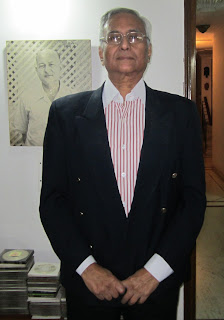 Jay Bhattacharjee is a policy and corporate affairs analyst based in Delhi who has worked in the corporate and banking sectors. He studied Economics, Finance and Sociology at Calcutta and Cambridge and is a student of Indic civilisation, history and military affairs.
This Article was earlier published in The Salute.
at February 18, 2018 No comments: