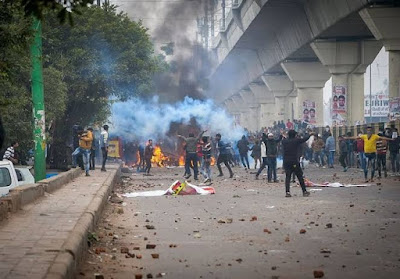 Congress and Communist slide into the dustbin of history continues as the violent protests knock the bottom out of popular support. Each such trojan will polarise the injured Hindu into the BJP Camp. The scorched earth campaign shows the existentialist crisis in both regarding illegal immigrant muslim Votebank purportedly threatened  by CAA,

The real crisis for the Congress and Left is the NRC. Also the real target of these violent protests engineered to somehow stall or prevent it from going through. While nobody has seen the NRC Draft Bill, its ghost has started hounding both.

The passage of the NRC is imminent. Sooner or later it will be revealed, hopefully with better communication unlike the CAA. Go through it will for Modi and Shah will not fritter the majority mandate to achieve their political goals, communicated in the BJP Manifesto.

Expect more violence and muscular policing and arrests to minimise effects of this campaign. Expect arrests in both Congress and Communist leadership as Intelligence led operations expose the contours of this sinister campaign.

The support for this campaign will evaporate as those misled into false premise causes realise that they have been had under false premise and social engineering. Hopefully with minimal casualties and loss of public property.

The maximalist positions on social media that have led to many a unfriending and arguments will fade into embarrassing silence.

The media and the influencers too have learnt their lessons on manufactured unrest. One remains buoyant on the wisdom of the Hindus, as India is reclaimed by Bharat from McCaulays half breeds compromised by colonial slavery.

The CAA, NRC and UCC represent the impulse of a people to reverse demographic invasion and purge regressive Islamist culture and practices from the national identity. They also represent election promises of the BJP to its voters who brought it to such rare majority mandate in Indian politics. The muscular numbers mean easy passage of legislation in both Houses of Parliament.

The rise of Bharat from the ashes of colonial India must see a robust framework for Internal Security buttressed by reform on Immigration, Citizenship, Police and Intelligence. Both Narendra Modi and Amit Shah have done that in this Government what was outstanding from the Independence of India in 1947.

The RSS often sullied by those compromised by their colonial upbringing has proven to be the nursery of leadership. It has done more for nationalism than all political movements in contemporary history both pre and post Independence and the unfortunate partition midwifed by Colonial Britain with ulterior motives and Hinduphobia.

Provincial political movements, caste, language and other fissures are today being filled over by a brutal globalisation. It is in this cauldron of competitive interests that someone has dared to attempt nation building and sovereignty. That is rare. That must be lauded for daring, for resourcefulness and for steel nerves.